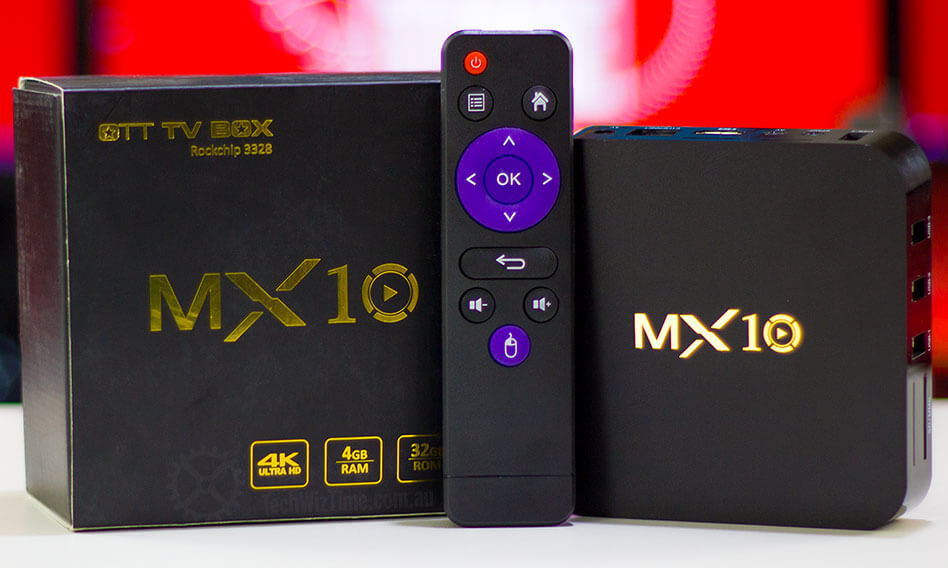 Once I published the video review for the MX10, I was met with some great responses. It seems a lot of people have been waiting for a review of this Android TV box, and I’m only too happy to oblige. Thanks to Gearbest for sending me the MX10, and no money has changed hands for this review. The thoughts and opinions are mine alone.

The MX10 looks great. It will sit on your home entertainment unit nicely, having a really small footprint, and the ports are easy to access, too. There’s a nice gloss finish around the sides, and a matte finish on the top, with gold logo. The MX boxes have always been plain but nice looking, and this MX10 is no different.

The remote is an intuitive little thing, and has all the usual buttons, with a fairly competent range. My complaint with most of the budget Android boxes is that the range of the remote is annoying, especially when you have to point it right at the IR receiver. The remote for the MX10 is adequate, and the rubberised buttons ensure you don’t drop it every two minutes, too.

Hands on with the MX10

As you can see in the video review, the benchmarks were pretty good, but practically speaking, the MX10 does not deliver on some of the promises made by the little icons you will see on the product images online. More on this later.

Hooking the MX10 up to your TV is a breeze, and only requires you to plug in via a HDMI cable. The TV box will boot up into a regular Android desktop view, and you can select the Kodi app or media player from here to get going right away. The load times are pretty good, and you won’t be hanging around long for the apps to appear on your screen.

Benefit from a built-in VPN

It’s worth mentioning that if you are doing any streaming, a VPN is advised. If you want to watch some streams from outside your country, or if you want to watch most Kodi streams, you will need a VPN. Most VPN services offer an Android app, which you’ll be able to install on the MX10 easily.

As I mentioned earlier, there are some issues with video. You will see a lot of the Android boxes stating that 4K is supported, and up to 60fps. You can see here in the video review, that this is not always the case. I had videos just not play at all, or at a paltry 5fps when running at anything over 55Mbps. If you are wanting an Android box that will play 4K video, and large format files, this is not the box for you unfortunately.

The video at 55Mbps is really good, and the sound is excellent, also. If you want to test your own Android box with the Jellyfish videos I use, you can find those here: http://jell.yfish.us/

As always, I like to show what the gaming potential is with anything that will actually play them. I used apps like PPSSPP and native Android games to test the MX10, and I was really happy with the framerate and playability. having Bluetooth and USB connectivity means you will be able to connect your gamepad, or mouse & keyboard, to further enhance your gaming pleasure.

Games like Power Stone worked great, running at about 45fps. This was my experience with most 3D games on the MX10, and it is a competent Android gaming box, as long as you don’t expect too much from it.

Naturally, I had to test God Of War (PPSSPP emulation) and sadly, I was left wanting. You really do have to spend a little more on your TV box if you want to be playing resource hungry games, and this box is just not able to do it.

With 4GB DDR3 onboard, and the Mali 450 GPU, the MX10 will handle most of the regular expectations of an Android TV box. DLNA is supported, so you’ll be able to stream from your other media devices such as your PC or laptop. The Wi-Fi is acceptable, and I had some good speeds that enabled buffer-free streaming in 720 and 1080p HD.

Apps like YouTube work great, and you will have no problems watching 1080p video whatsoever. Netflix worked perfectly fine, as well, though I have heard a lot about full HD not working in the Netflix app. More investigation on this is required.

All in all, you can’t expect too much for under $60, and to get more onboard RAM, better graphics handling and a more powerful processor, you are looking closer to $100. If you are just looking for a HD streaming box that does not have to play full 4K files all the time, this is ideal. I would say that its a great starter box, and ideal for anyone just starting out in the world of Kodi and the Android TV box. As things move on in development terms, this box will serve you well, because it runs on a well-supported firmware and of course the Android OS.

IPTV is a hotly debated topic, and if you are thinking about buying a TV box for IPTV, then this box will run most of the apps out there. You will of course need a VPN in the majority of situations. HD streams will work okay, and the MX10 has enough speed and power to handle the apps that will run IPTV.