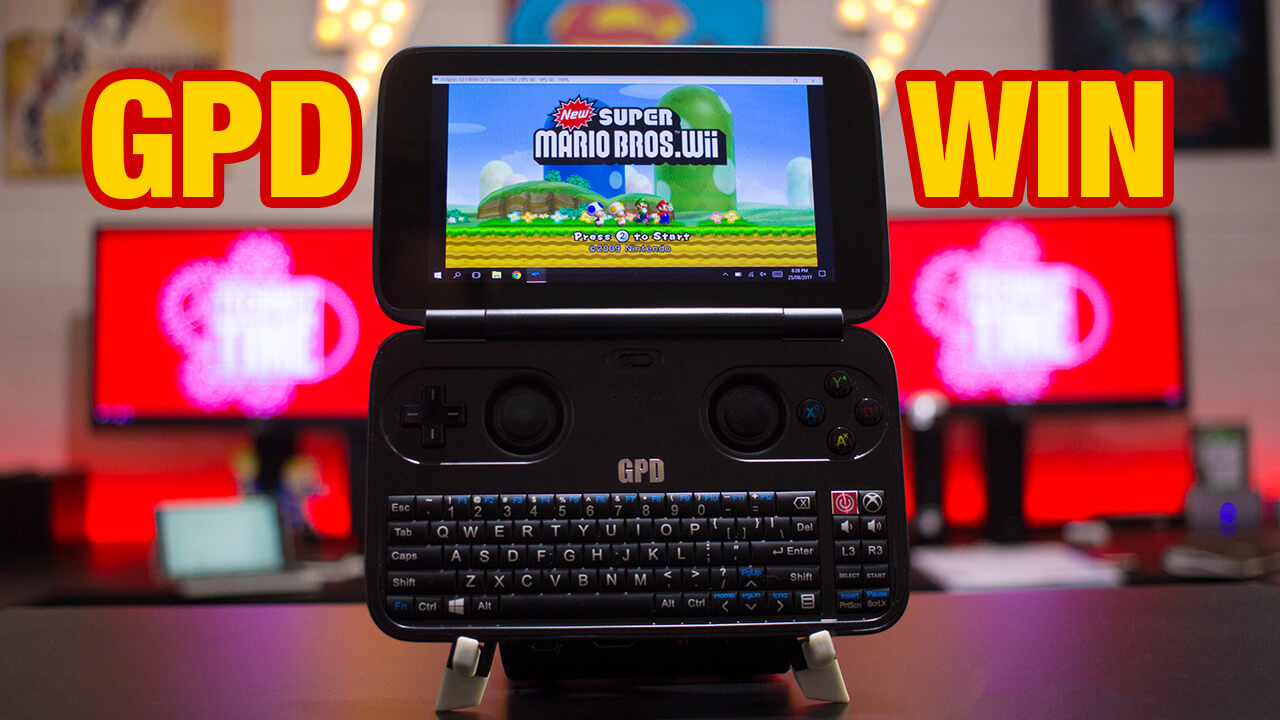 This Ultra Portable Steam PC Gaming Machine is the GPD Win. Playing Steam games on the go isn’t as easy as it seems. Whenever you sacrifice size you also sacrifice power. The GPD Win on the other hand is an ultra portable Windows gaming device. Full disclosure. I was sent the unit out to review from Gearbest. Grab your own GPD Win here! 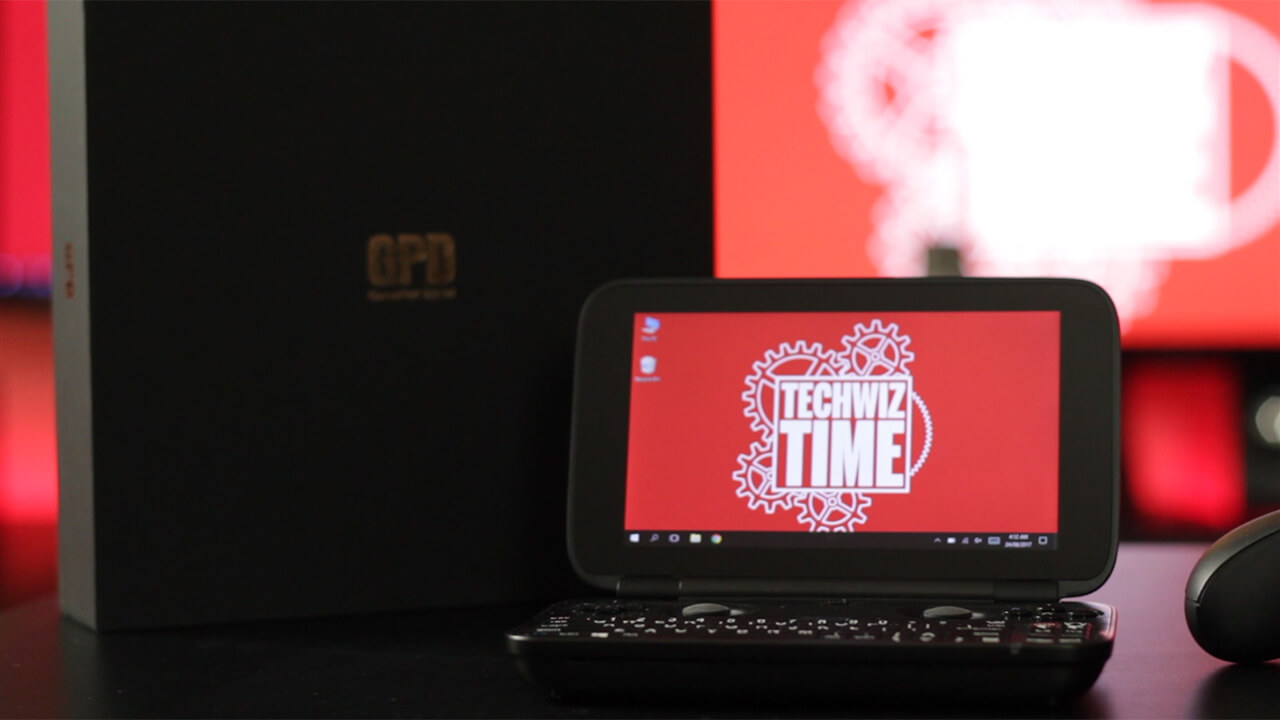 What is the GPD Win

The GPD Win is a full blown handheld Windows PC. With a 720p 5.5” inch IPS Touch Screen, the GPD Win is small enough to fit inside your pocket or a man bag. Having such a small screen with this device can be a little bit tricky to work with. With the latest version of Windows though, scaling up to 125 percent seems to make things a little bit easier to navigate. If you feel really daring you can up that to 150 percent but just note that programs like steam won’t go fullscreen. Windows 10 Home is included in the price as well.

There are two main versions of the GPD Win produced. The older X7 Z8700 CPU and the Newer X7 Z8750 version.This review is based on the Aluminium Z8750 version for those interested. From what I’ve researched, there’s not a lot of difference between the two. But newer is better right?

The key selling point of a GPD Win is the in-built game controller. But it doesn’t end there. Right in the middle of the device is a toggle switch which allows you to switch between a direct input device, a mouse mode, and an X input device. 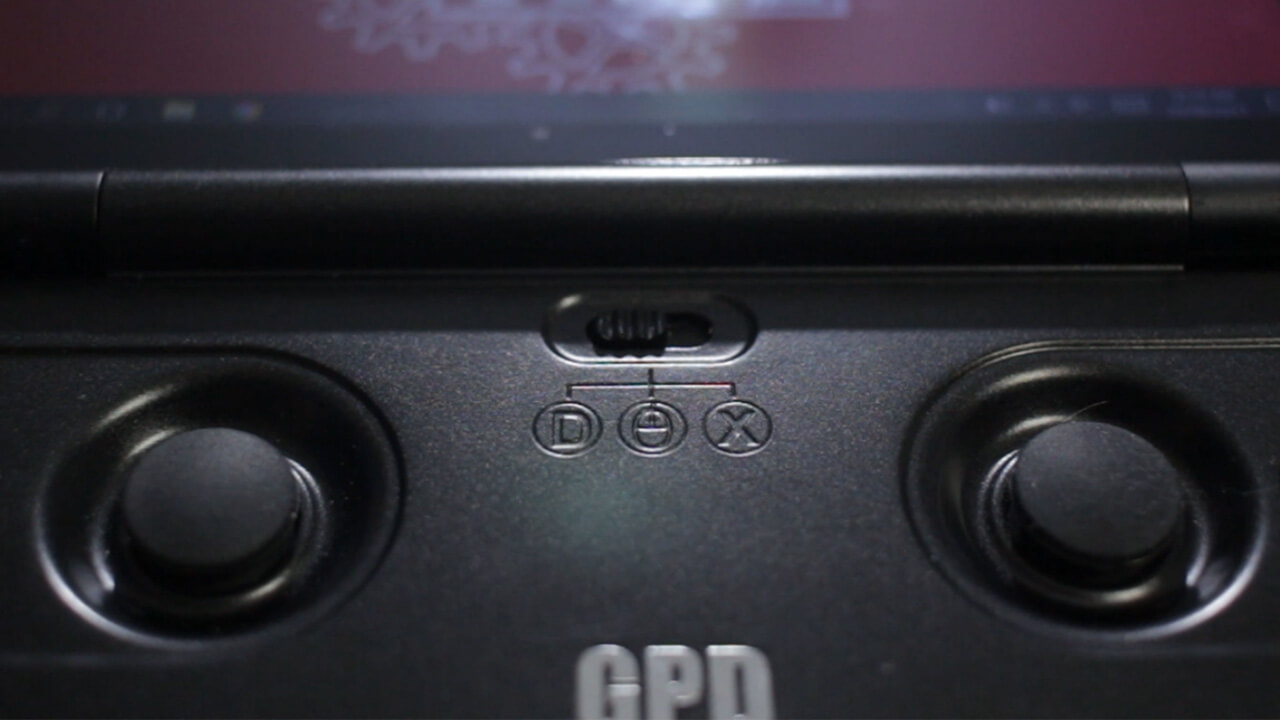 Focusing on the mouse mode for now, the right analogue stick will allow for cursor movement on-screen. The L1 button will act as the left click and R1 will be the right. After using this for a while, I prefer using this method over the touch screen personally. As well as mouse controls, we also have a full blown QWERTY keyboard. You won’t be typing any novels with this but it’s handy for when you need it. 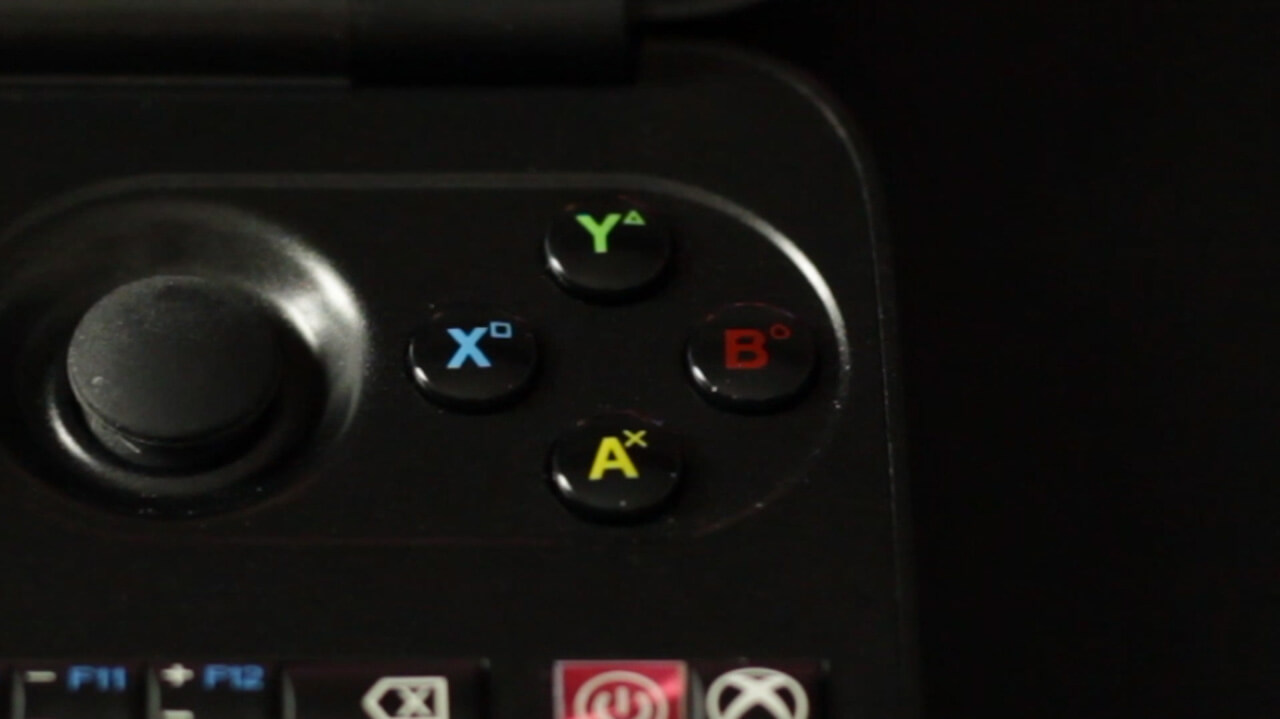 Just like it’s younger cousin the GPD XD, the controls lack clickable analogue sticks. Those buttons are over on the right with a few others to boot. From the top we have Power and the middle XBOX button for X-Input games, Volume Up and Volume Down, L3 and R3, Select and Start and Print Screen and Scroll Lock. The A B X & Y layout also includes the PlayStation symbols for Emulated games as well. 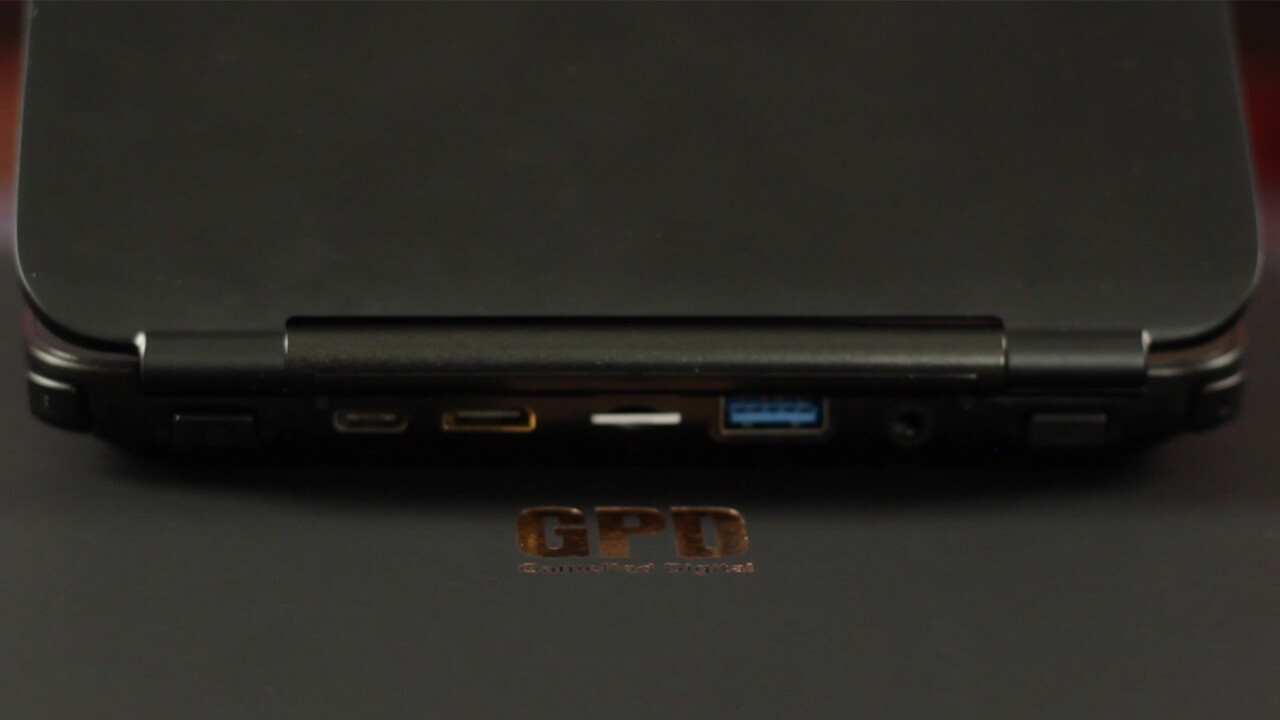 Over on the rear we can see the L1, L2 R1 and R2 buttons. Clicky only sorry guys. And then we have some ports. USB C for charging, Mini HDMI Out, A micro SD Card Slot, a USB 3 slot and a 3.5mm jack. Underneath the device we have the fan switch being off, medium speed, and full speed. Full speed is a little loud but medium speed is not noticeable at all. 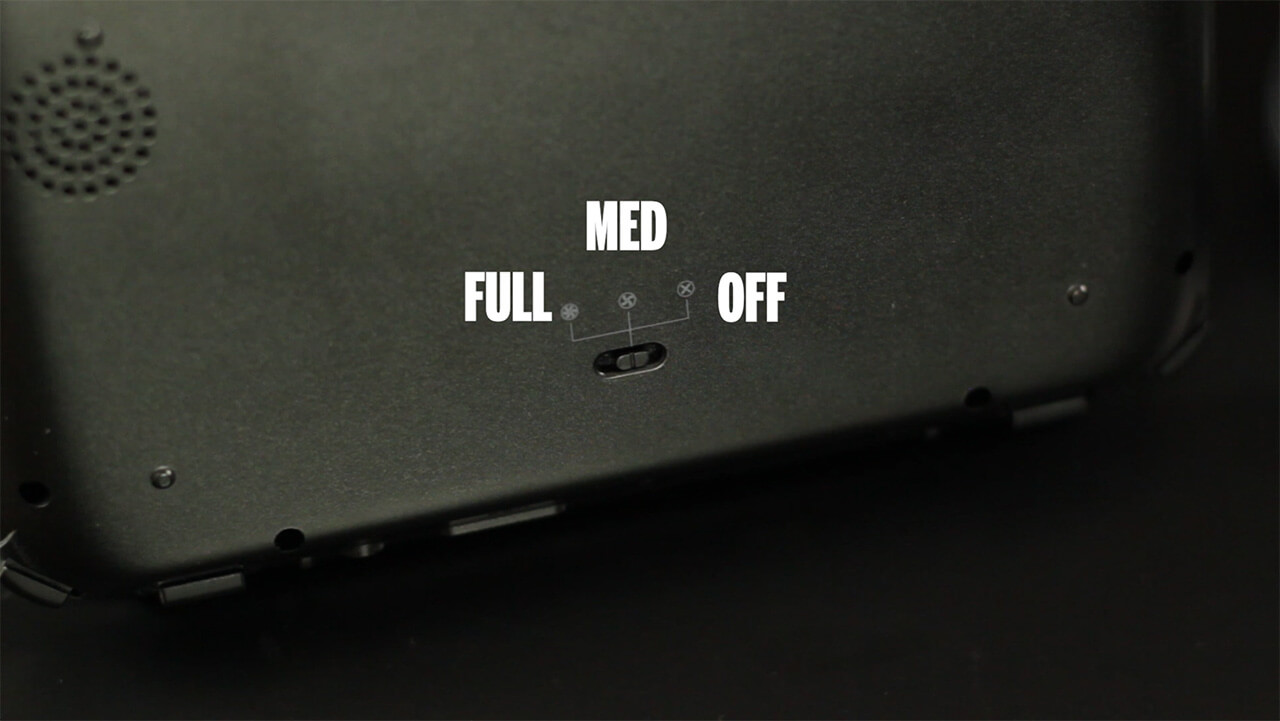 With all that out of the way, lets talk specs. The X7 Z8750 is a Quad Core 1.6ghz Atom Processor which can burst up to 2.56ghz. The inbuilt GPU is an Intel HD Graphics 405 chip with enough power to run up to Nintendo Gamecube games which is a huge plus. Ram comes in at 4GB which is the bare minimum for Windows these days. Bluetooth 4.1 is a very nice addition with Wifi comes in at up to AC speeds.

On to storage. The GPD Win has 64GB of eMmc storage built in which is okay for most people. If you are going to be Steam Gaming on the GPD Win, I would highly suggest a Samsung 128GB USB 3.0 Flash Drive Fit from Amazon. Triple your storage for less than $40. You can find the Samsung 128GB USB3 Drive here! The Micro SD Card speeds are around a half to a third of USB 3 speeds, so only use the MicroSD slot for ROMS or extra storage. Battery life on the GPD Win is fairly decent too with a 6700mah battery. Good for up to 5 hours of gaming in most instances. 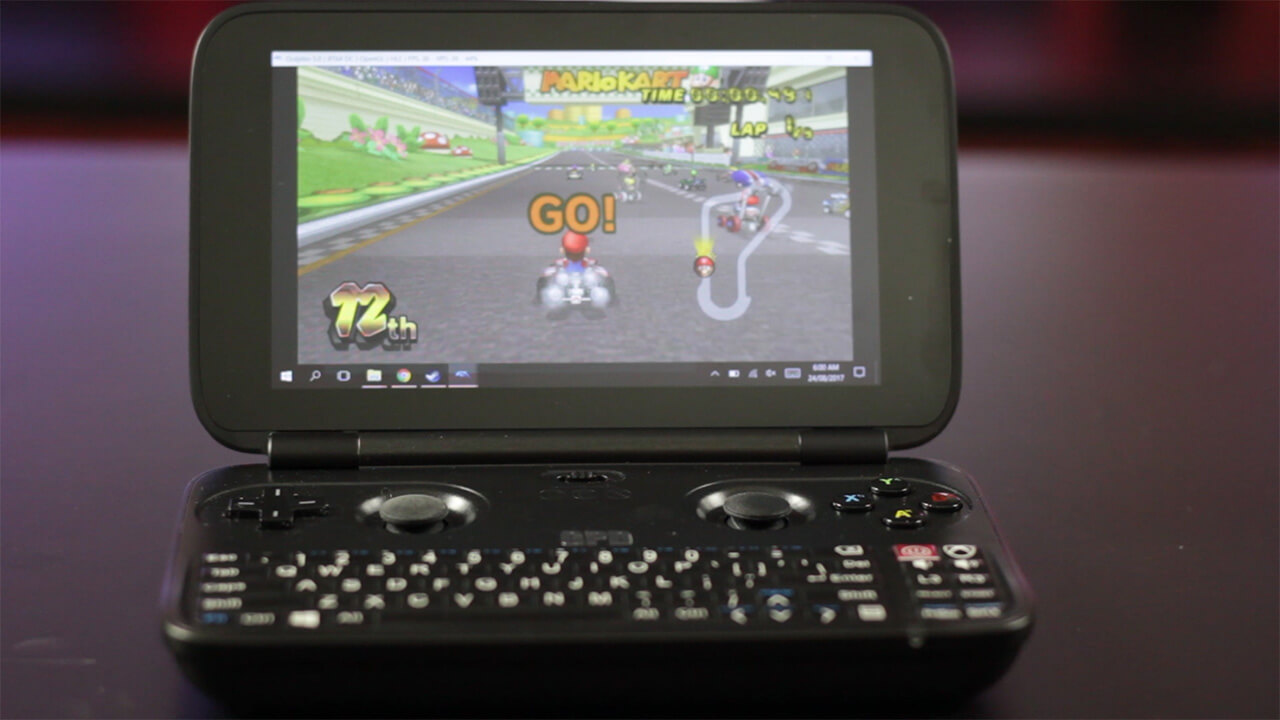 So let’s talk about Emulation first and then Native PC Gaming. The GPD Win is powerful enough to emulate most consoles as high as the Nintendo Wii in some circumstances. Here we have New Super Mario Brothers Wii and Mario Kart Wii playable. Other Wii games do work but don’t expect any miracles. With a little bit of tweaking, most Gamecube games will run at a fairly decent FPS.

Nintendo 64, PSP, PS1 and Sega Dreamcast are mostly fine with the odd few not performing. When it comes to PS2 Games though, it’s a little hit and miss. Some work okay, where as most don’t achieve that minimum 30 fps. In the future, I’ll be putting together a bunch of tips for optimising the GPD Win for better FPS and better battery life. Make sure you’ve got notifications turned on for that one.

Now, on to PC Gaming. This is where the GPD Win Shines in my opinion. Whilst you are not going to be running Triple A titles like Grand Theft Auto 5 or Overwatch, you can still tackle a huge pile of that Steam back catalogue. 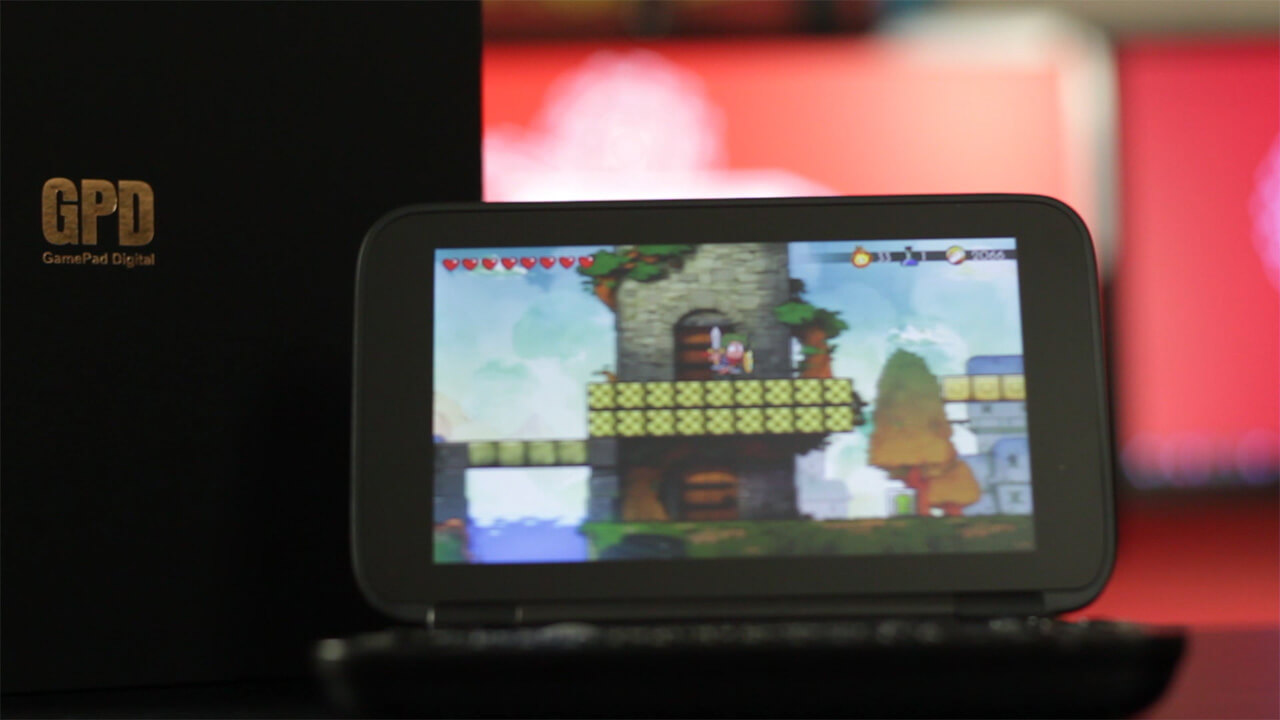 With a little bit of tweaking, Fallout 3 was perfectly playable. Even smashing Zombies in Dead Island was a blast. Most indie game titles should be fine as well. I managed to complete my childhood favourite Wonderboy Dragon’s Trap on the GPD Win without any problems. 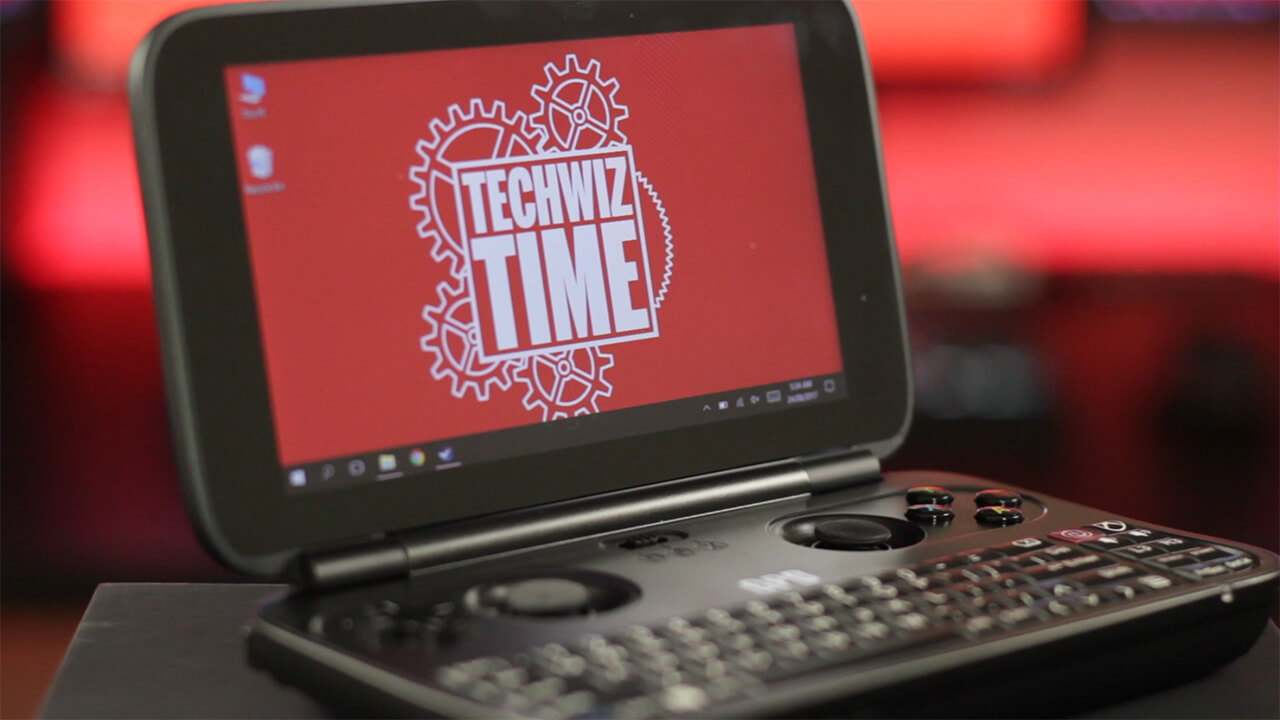 Gaming is what the GPD Win was made for but you can still do other Windows things on it as well. If you really wanted to, you could edit videos on this using Adobe Premiere Pro or do some Voice Typing in Google Docs whilst on the Bus or Train. Please don’t do that.

But with all great things comes some downsides. If I had to be picky with the GPD Win, it would be the lack of clickable analogue sticks and pressure sensitive L & R Triggers. Also if you are looking for a power-house like the elusive Smach Z, then look away. The GPD Win is the closest you will get to a portable Steam Gaming Machine for now.

With all that said and done, if you are looking for something like the GPD XD but with more power, then the GPD WIN is one of the best choices out there. Especially for a Windows Handheld PC.

If you are interested in purchasing one for yourself, then vist this GPD Win link. Also, if there any games you would like me to test out on the GPD Win, leave a comment to let me know.